I found this lovely post on “How to treat your sisters in Islam”, Alhumdulillah. But I think it is applicable for brothers too if generalized. Read on…

How To Treat Your Sisters In Islam 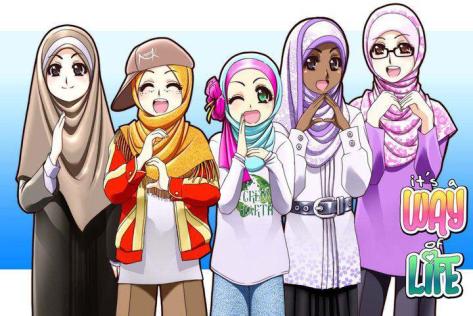 1. She loves them for the sake of Allah:

This is a love untainted by any worldly interests or ulterior motives. True sisterly love is a relationship whose purity is derived from the light of Islamic guidance (Dr. Muhammad A. al-Hashimi). It is a bond that links a Muslims to her sister regardless of geographical origins, ethnicity, skin color, hair form, eye shape, or language. (It is) a bond based upon faith in Allah (subhaanahu wa ta’aala) Who is greater than all our little petty divisions.

A love which is an expression of the sweetness of faith:

“There are three things that whoever attains them will find the sweetness of faith: if Allah END_OF_DOCUMENT_TOKEN_TO_BE_REPLACED

“Everyday this hunchback utters this jingle! What does he mean?” One day, exasperated, she decided to do away with him. “I shall get rid of this hunchback,” she said. And what did she do? She added poison to the chapatti she prepared for him! As she was about to keep it on the window sill, her hands trembled. “What is this I am doing?” she said. Immediately, she threw the chapatti into the fire, prepared another one and kept it on the window sill. As usual, the hunchback came, picked up the chapatti and muttered the words: “The evil you do, remains with you: The good you do, comes back to you!” The hunchback proceeded on his way, blissfully unaware of the war raging in the mind of the woman.

Every day, as the woman placed the chapatti on the window sill, she offered a END_OF_DOCUMENT_TOKEN_TO_BE_REPLACED

A year back, a girl was walking the path to recovery! Fallen in the dungeon of dunya she had lost her way. Broken .. shattered.. and confused.. with no hopes what so ever about life she wished for some miracle, some reason – atleast one reason – that would give her a reason to live! Every morning waking up to the torture of living her day, she would wait for night to re-appear so she could go back to sleep, hoping that she would not see the light of the next day! She was tired! Tired of this ruthless world. Tired of her confused feelings. Tired of the people around. Tired of herself. If it weren’t for the little imaan that was left in her heart, she would have either ended her life or lost her sanity for nothing.

When we fill our hearts with the glitters of this dunya the outcome is nothing but disappointment and pain. If only she knew…

She went from door to door knocking for help hoping against hope that someone…atleast one among her friends would be able to take her out of the painful life. She did get words of hope, but that was not enough! The cut was too deep and the words were insignificant to make it heal!

In the midst of pain one night, END_OF_DOCUMENT_TOKEN_TO_BE_REPLACED

An excerpt from the book “Don’t be sad!”

Those who are ignorant have uttered curses at Allah, the Exalted, the Creator of ill that exists, so what treatment should we, who are full of faults, expect from people. You will always have to face criticism, which in its onslaught is like an interminable war: it shows no sign of ending. As long as you shine, give, produce, and have an effect upon others, then disapproval and condemnation will be your lot in life. Until you escape from people by finding a tunnel in the ground or a ladder leading to the sky, they will not desist from censuring you, from finding fault in your character. For that reason, as long as you are from the denizens of earth, expect to be hurt, to be insulted, and to be criticized.

And here is something you should contemplate: a person who is sitting on the ground does not fall, and people do not kick a dead dog. Therefore their anger toward you can be attributed to you surpassing them in righteousness, knowledge, manners, or wealth. In their eyes you are a transgressor whose wrongs cannot be atoned for unless you abandon your talents and strip yourself of all praiseworthy qualities, so that you become stupid, worthless, and to them, innocuous. This result is exactly what they want for you.

So remain firm and patient when facing their insults and criticism. If you are wounded by their words and let them have an influence over you, you will have realized their hopes for them. Instead, forgive them by showing them the most beautiful of manners. Turn away from them and do not feel distressed by their schemes. Their disapproval of you only increases you in worth and merit.
Verily, you will not be able to silence them, but you will be able to bury their criticisms by turning away from them and dismissing what they have to say.
`Perish in your rage ‘. (Qur ‘an 3: 119)
In fact, you will be able to increase them in their rage by increasing your merits and developing your talents.
If you desire to be accepted by all and loved by all, you desire the unattainable.

In life we tend to be judgmental and very often look down upon others without exploring deeper and finding out why the person is behaving in such a way. The Beloved Messenger of Allah (peace be upon him) is reported to have said: “It is enough of evil for a person to hold his brother Muslim in contempt. All of a Muslim is sacred to another Muslim: his blood, his wealth and his honour.” (Saheeh Muslim)

A young couple moves into a new neighbourhood. The next morning while they are eating breakfast, the young woman sees her neighbour hanging the laundry outside. “That laundry is not very clean”, she said. “She doesn’t know how to wash correctly. Perhaps she needs better laundry soap.” Her husband looked on, but remained silent. Every time her neighbour would hang her washing to dry, the young woman would make the same comments.

Some time later, the woman was surprised to see a nice clean laundry on the line and said to her husband: “Look, she has learned how to wash correctly. I wonder who taught her this.”

“The husband said, “I got up early this morning and cleaned our windows”

Lesson: If our windows are dirty so will we see others as dirty too. What we see in others is indeed a reflection of our inner-selves! So it is with life that what we see when watching others depends on the purity of the window through which we look. It is easy for us to condemn, discuss other people, their lives & things that really doesn’t even concern us and we tend to forget – our windows may not be that clean after all! If we good we will see good…

The Beloved Messenger of Allah (peace be upon him) is reported to have said:

“A Muslim is a mirror to another Muslim” (Abu Dawud) 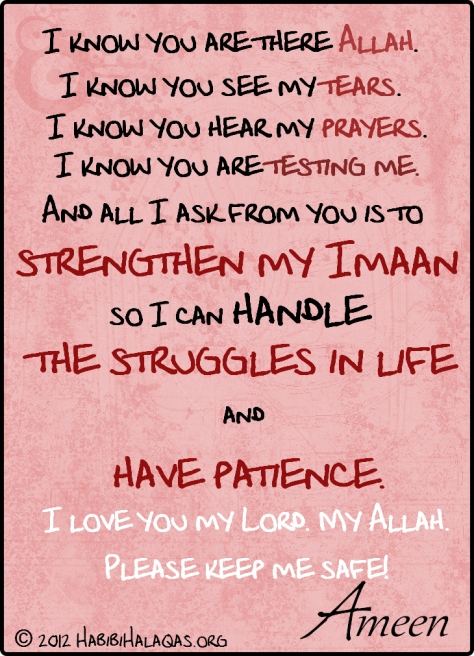 I received a mail last week, about a Muslim girls meet that was happening in my city. It was a group started so that interested muslimahs could come together and learn islam the fun way with halal activities like watching documentaries together, quizes, games, and other creative stuff, Alhumdulillah!

I was very excited to attend this, because I felt I had a wonderful opportunity to meet the other muslimahs in our city and additionally make some righteous friends for the sake of Allah! 🙂 .. But that isn’t what this post is about!

My friend and I went for the meet in her car which she was driving! Usually we go with my driver but since it was a sunday he was on leave, so we didn’t have a choice! So, reading dua we started off to the place where this was being organised.. We were quiet unsure about the place too since it was a little far off from our area but Alhumdulillah we found our way to it!

On our way back, after more than half the way home .. we heard some weird noise! We realised the noise was coming from the tyre; so we moved to the side and stopped the car immediately! END_OF_DOCUMENT_TOKEN_TO_BE_REPLACED

As you pass by my blog, if you find something helpful, please do take few seconds to make dua (supplicate) for me and my family for a better life in this world and hereafter! :) May Allah bless you with the same! Jazakallahu Khair! :)

Articles, videos and some tips on getting over the sadness! Click on the image, to read the posts in the series!!

Advertisements that appear on this blog are posted automatically by Wordpress. I hold no control over the type of advertisement or content that is advertised.